News
It is with great sadness that we inform you that John Hostetter passed away on September 2, 2016
He will be sorely missed. 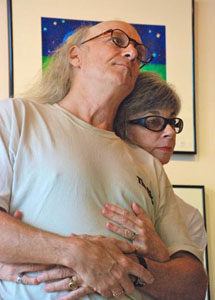 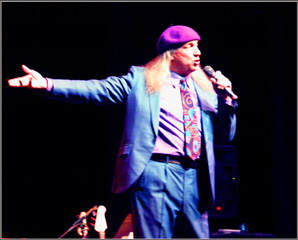 Vital stats:
Band you play with regularly:
The Pirates with Timmy Probst and Bill Games
Instrument(s) you play:
Mostly 12-string guitar and harmonica
Music resume:
I played clarinet and percussion in the school band and orchestra and learned music theory. Picked up the guitar when I joined a folk group in high school. Then the british invasion happened and we all pretended to be The Beatles and the Stones. Started writing songs. Met David Borden in Ithaca, NY.. He was a composer working with Bob Moog. We recorded a "rock demo" using a prototype Moog synthesizer in 1969. Had an eclectic group in L.A. called The Nonchalants. We did originals, latin, rock, and jazz. Sang a bunch of Lambert, Hendricks, and Ross material, too. Helped found The Mighty Echoes (acappella doowop) in 1986. Sang with them until I moved here in 2001.
Acting resume:
Had a nice recurring role on Murphy Brown as the stage manager. Also played lots of cops: No Way Out, Heartbreak Ridge, People Under The Stairs, etc.. Did a fun psycho on J.A.G.. Sang with Tony on Who's The Boss. Had a couple of voices on G.I. Joe and Transformers. In the theater I got to play King Lear, Estragon in Waiting For Godot, Milo Tindle in Sleuth, and Henry Higgins in Pygmalion.
Day job:
My wife and I manage Jonah's Cat's Art Gallery in New Smyrna Beach. Samuel Ruder brought me in four years ago. I was making one-of-a-kind walking sticks and he encouraged me to try painting. Now my art hangs along side his in our beautiful new space. We reopened in April after a 20 month hiatus thanks to Hurricane Charley. I do have an acting agent in Orlando, but since I let my hair grow, unless the part is a wizard or an old hippie I don't get any calls.
Hometown:
Brooklyn, N.Y.
Current residence:
New Smyrna Beach
Type of music you perform:
Acoustic rock with a hint of folk, country, and jazz.
List seven or eight songs in your repertoire:
Legend of Detroit, Big Bang Boom, Rockin' The Boat, Surrender The Booty, Flagler Ave. (originals)...
In The Summertime (Mungo Jerry), Black Is Black (Los Bravos), Rockin' Robin (Bobby Day)
Upcoming area gigs:
every Thursday, 9-11 p.m., Peanuts, 419 Flagler Ave., NSB, 386-423-1469
every Friday and Saturday, 6-10 p.m., Sea Harvest, 107 Riverside Dr., NSB, 386-426-5301
CDs available?:
The Pirates' first CD "Rockin' The Boat", $10 at gigs or $13.50 at thepiratesnsb.com.
Do you have a Web site?
johnhostetter.com. I have some solo CD's available there plus my art work and links to The Pirates and The Mighty Echoes.

What or who inspired you to pursue music?
The folk scene in the sixties got me performing and listening to some great songs. Judy Collins, The Kingston Trio, even The New Christie Minstrels were sources of inspiration. Then the rock
groups took it to a new energy. Plus they were writing their own songs and doing such imaginative material with great harmonies and instrumentation. Traffic, Incredible String Band, Moby Grape, all were influential for me. I've also had the good fortune to work with some superior musicians who allowed me the freedom to stumble along in their wake while encouraging me to create in my own way.
If a DVD time capsule could preserve only three of your acting roles and they would be viewed 1,000 years later, which three would you choose? Why these three?
1. Elvis impersonator in the art house film "Aria". I lip-synch "La donna e' mobile" from the opera Rigoletto dressed as the Vegas Elvis. I am only on screen for about 20 seconds or so, but I'm working it.
2. Dr. Krassman in "Kermit's Swamp Years". Got to work with Kermit and play the bad guy.
The director and producers let me overact to my heart's content...actually they encouraged me.
3. A store clerk from the competition in a 7-11 commercial called Mobile Judge directed by the great Errol (Thin Blue Line) Morris. While defending my choice of meat products I tell the judge, "It's a generic hotdog". Something in my delivery is so pathetic yet manipulative that the performance still dwells for me in a place both ridiculous and sublime.
How did you come to play those exotic instruments, such as tamboura, on the upcoming Pirates CD?
I've collected lots of strange noise makers in my life and I like to use them in the studio whenever I get a chance. We used the tamboura on our first CD too. It has a shimmery drone-like sound that works well on songs in minor keys. Our producer, Billy Chapin, has been kind enough to let me play my harmonium, tabla, berimbau and banjo so far. We even recorded a rhythm track using brushes on the floor.
Most unusual gig you've ever played:
The Mighty Echoes were hired to sing for a couple in a booth in the back of a funky little hoagie place in L.A.. We did two sets...all cuddled up together. We had to learn "Apples, Peaches, Pumpkin Pie" for that gig. Only time we ever sang it.
Musician/celebrity/historical person you'd most like to have dinner with (living or dead):
The late, great Lord Buckley, the hipsemantic humorist and storyteller, has had such a strong influence on my life that I would love to meet him up close and personal. His message was all about love. Although judging from his life story, I'm sure he'd stick me with the bill.
Last book you read:
Dreamings: The Art of Aboriginal Australia.
What CD/tape is in your car and-or home stereo right now?
Tell Me Something / The Songs of Mose Allison, with Van Morrison, Georgie Fame, Ben Sidran, and Mose.
Favorite movie:
The original Bedazzled with Peter Cook and Dudley Moore.
Best concert you ever attended:
Jimi Hendrix, March 10, 1968, Washington Hilton Ballroom. Sixth row, right in front of him!
He played so theatrically and with such ease that it was incredible to behold. The Soft Machine was the opening act. They were a pretty powerful trio also. 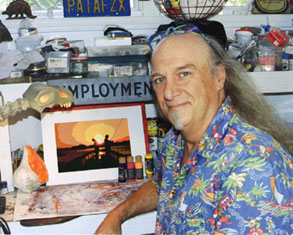 Late-blooming artist John Hostetter is happy to work on his art in his studio. 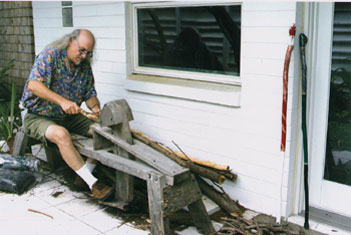 John Hostetter shaves cedar branches on a schnitzelbonk (shaving bench) to be used in his walking sticks, right.


Actor-Musician-Artist Seems To Have Nine Lives

If a cat has nine lives, that's nothing compared to the number that artist John Hostetter has racked up - and he's still counting. There's Hostetter, the actor - on stage, on big and small screens; Hostetter the musician, singer, songwriter; Hostetter, the artist; and now, Hostetter, the cat painter. Hostetter is one of 41 artists participating in the Picatsso Project, culminating with an auction Nov. 22 at the Museum of Arts and Sciences in Daytona Beach.  His entry, "The Cat With a Heart of Gold," suggests one facet of Hostetter's complex personality and interests. His talents have led him, on one hand, to play King Lear in a National Shakespeare Company production and other roles actors dream of, and, on the other, to sing second tenor in an a cappella doo-wop group.
Hostetter and his wife, Del Appleby, have had lifelong interests in the performing arts, but fine art is something new to him. The couple bought a home in New Smyrna Beach 11 years ago, "but we got tired of just visiting it, and moved here in February 2001." Before that, Los Angeles was home.  Appleby worked as a theater actress and dancer, while he forged a successful acting career in movies and television. Before moving to New Smyrna Beach,Hostetter's California home had been his only canvas - the Joan Miro-like bathroom,the Rothko-homage refrigerator.  (Can't you just picture it?) Leaning against the gallery's wall are his signature walking sticks, home grown, in some cases, in his backyard. At 6 feet, 2 inches, Hostetter could be the real-life cop he portrayed in the movie "The People Under the Stairs," or the government agent of the film "No Way Out." On a recent day, Hostetter was at Jonah's Cats Art Gallery, the Flagler Avenue venue where he is represented. His works are toward the back of the space, which seems fitting for the newcomer. Looking at all 190 pounds of him - hippie hair, hazel eyes, stereotypical assumptions, and then do a mental double-take when he starts talking about art. Here's a bit of what he says about The Cat With a Heart of Gold: Returning from a journey of discovery across the alchemical rainbow... she proudly wears the heart of gold reflecting the light of love." Not what your might expect to hear form someone who portrayed a Bolian Officer in the movie "Star Trek Resurrection." But you might expect it knowing that Hostetter has both an undergraduate degree from the University of North Carolina, and an MFA in theatre from Cornell.
After UNC, he toured with a jazz band, and still plays music once a week at a New Smyrna Beach club. In more ways than one, sleepy New Smyrna Beach is a long way from Los Angeles. "But I don't miss it in the least", he said. "My whole temperament has changed." Even with memories of a recurring major role on "Murphy Brown," of starring guest shots on other TV shows such as "Arliss" and "NYPD Blue" to "Who's The Boss" and "JAG," it's still "No thank you" to all those orders stage folks used to bark at him. But following a different path isn't only about autonomy for Hostetter. In a sense, even with film and CDs to preserve a performance, acting and music are ephemeral - disappearing as they're being created. This (art) is tangible," he said.  "Someone comes in, falls in love with it and goes, "Oh!" and takes it home with them." Just to keep his hand in the other arts, however, he has just cut a CD of songs he composed over the past 30 years, and one new one. Singer, songwriter, session performer, producer - he does it all, and plays guitar, keyboards, flute, percussion.  Except for stand-up comedy and improvisation, making art is one of his few non-collaborative performances. Of course, he still has an agent.  Maybe some day he'll think of something else he wants to be. 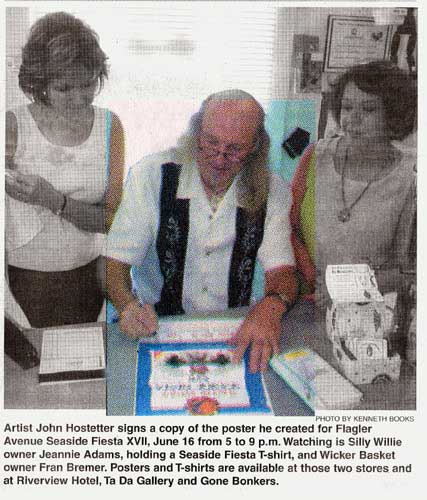 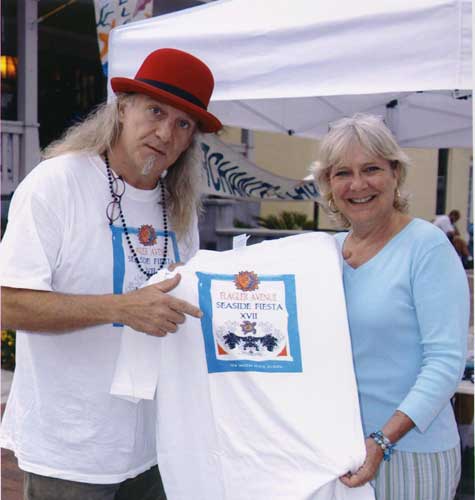 Artist John Hostetter, who designed the T-Shirt for the 17th annual
Seaside Fiesta shows his design to Adele Aletti of Gone Bonkers.